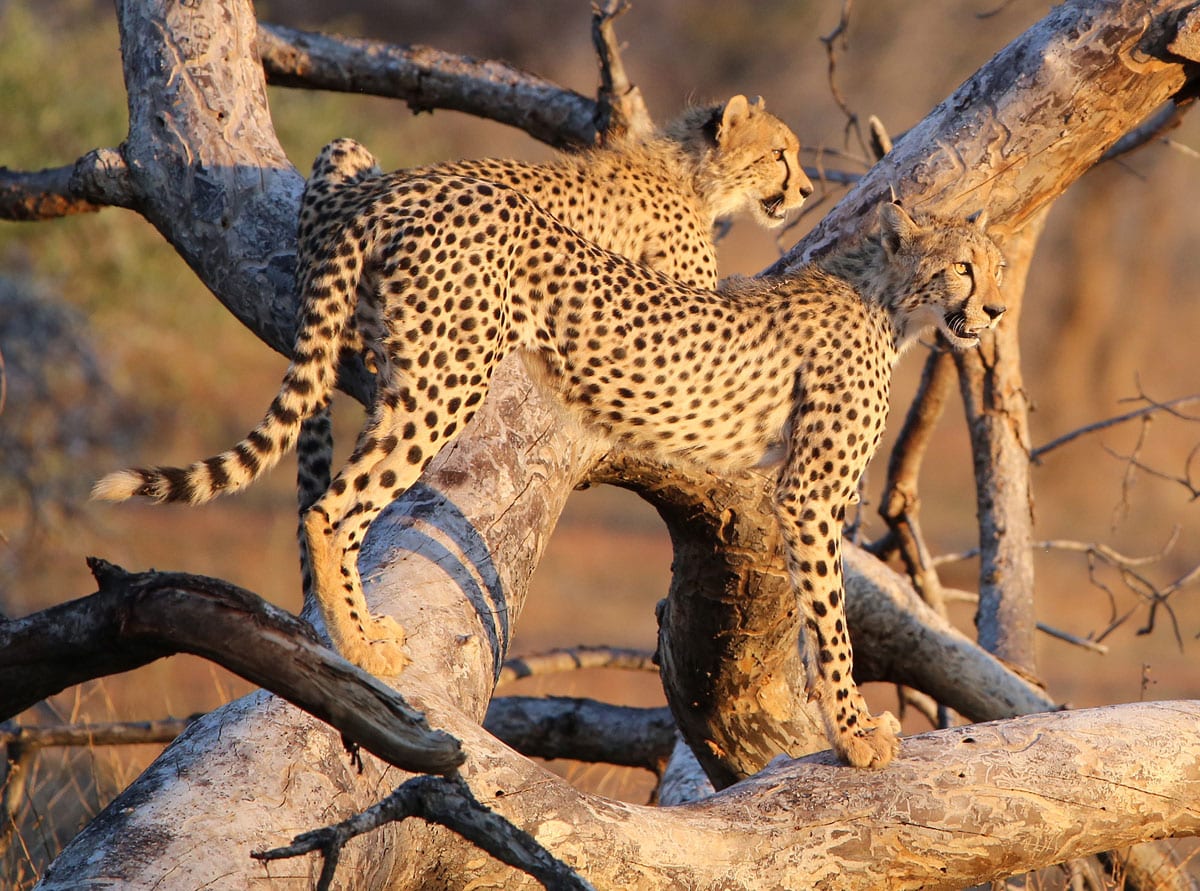 Historically cheetah have been sighted on the Selati Game Reserve area over the early years even before the reserve was established.  Between 2000 and 2010, 2 cheetahs, presumed to be male, were regularly seen in the north–eastern area of Selati. After 2010, a lone male was seen on the reserve occasionally for a few more years but eventually disappeared. It is presumed that with the development of game farms in the area and increased fencing, the movement of cheetah who require large ranges, had become restricted, their numbers were impacted upon by predators, traffic, hunters, human animal conflict and poachers. The increasingly reduced population could not sustain itself and each further casualty proves to be catastrophic to their ultimate survival.

In early 2015 an opportunity was presented to Selati by SANParks to introduce 3 young cheetah (2 males and 1 female) from the Mountain Zebra National Park in the Eastern Cape. The 3 young, 15th month old cheetah became available after their mother had died as a result of a snake bite. Because of the young age, the animals were initially introduced into a fenced 500hectare camp away from other predators and fed on a regular basis until such time as they could be released onto the greater reserve and could hunt for themselves.

The 3 cheetah were released into the camp on Selati on the 13th March 2015. The process of maintaining a presence in terms of feeding and monitoring and yet not allowing a human interaction was a careful balance and was strictly adhered to. The ultimate aim was to introduce wild cheetah onto the greater reserve. This re-wilding process necessitates that the animals come into contact with as few persons as possible. The translocation operation was sponsored by the Endangered Wildlife Trust (EWT) and Woolworths and was featured on the Television program series 50/50.

The advantage of re-introducing cheetah onto the reserve was based not only on the conservation of this unique species but also aimed at enhancing the biodiversity and balancing the ecological aspects of the reserve. Cheetah primarily hunt impala and the population number in the reserve is high and above the recommended amounts. In this regard the control of artificial water provision on Selati which can lead to over utilisation/habitat destruction is currently under revision.

During the months that the cheetah were in the camp they quickly learnt to hunt for themselves. Unfortunately, during the translocation of the cheetah out of the camp, one of the males died as a result of the stress of the darting of this operation. A short while later the remaining female was found dead near an impala kill. The speculation was that she had been killed by a leopard. The remaining male, designated CM01 was released onto the reserve. Regular sightings of him occur and he has proved to be a successful predator. At this stage, Selati was back to 1 male on the reserve and quest for a female was started. Eventually in discussions with EWT, a mature female was sourced from the Rietvlei Nature Reserve.

At this point Selati would like to acknowledge the exceptional work done by EWT in particular Vincent van der Merwe, the Cheetah Meta Population coordinator from EWT’s Carnivore Conservation Programme. Their work ensures the best possible coordination of the cheetah gene pool and the Selati game Reserve subscribes fully to this endeavor.

The 3-year old mature female proposed by EWT was born in the Welgevonden Nature Reserve. Her mother was from Phinda in Zululand and father a male from a farm in the North West province. Having been born on Welgevonden she was predator aware and also an established hunter. This is important as Selati has a healthy population of the main predators.

The non-profit entity, Selati Wilderness Foundation sponsored the project and she arrived on Selati on the 19th May 2018. Selati, being a research oriented organization prefers not to associate human names and traits to the various animals being researched and as such she is referred to as CF02.

CFO2 was released in the approximate location of the male cheetah CM01 on the Arundel section of Selati. CF02 was fitted with a radio collar and her movements monitored over the following weeks and months. On the 15th of July 2018 approximately 3 months after she was introduced, we were delighted to receive news that she had given birth to her first litter of 7 cubs. By this time, she had established a home territory in the north-western portion of Selati.

Just 1 month after the arrival of the 7 cubs, the female was sighted on her own. Based on further observation it became obvious that the cubs had either been abandoned or had been predated upon. The north-western area of Selati has a low lion frequency but high hyena density. It has thus been speculated that the cubs were mostly likely predated on by Hyena or possibly jackal. CF02 thereafter was observed moving to various parts of the Selati which also included the territory normally occupied by CM01. 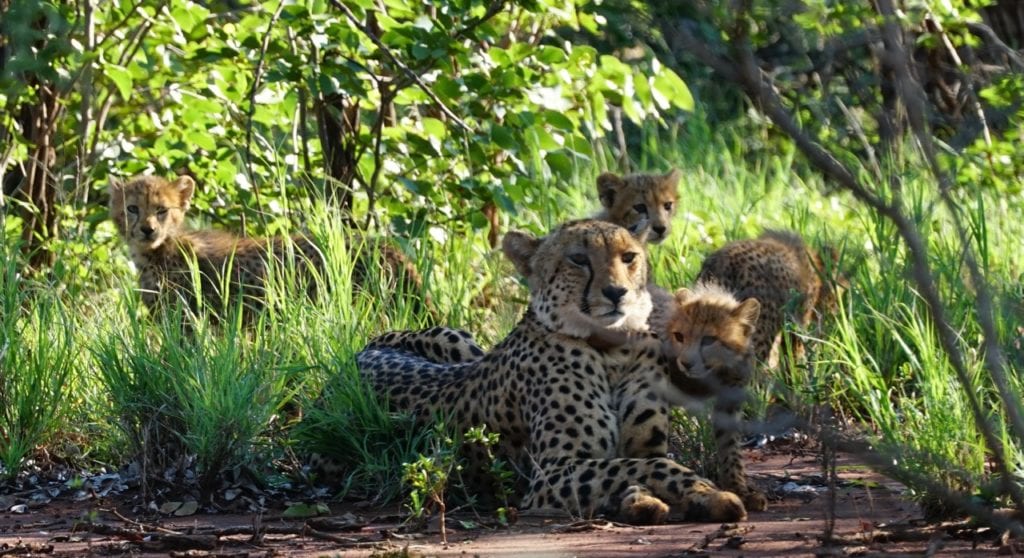 The Selati topography is not an ideal typical cheetah environment. The terrain is rocky with abundant vegetation and limited ‘Serengeti style’ open plains. CM01 and CF02 have however adapted very successfully to the Selati environment and have proved to be very effective hunters and CF02 an incredible mother and survivor.

How this population develops will be interesting to monitor. Selati, in collaboration with EWT, will discuss the best options for distributing these genes into the greater regional cheetah population to enhance the survival of these incredible cats and we are privileged to be part of this conservation journey. 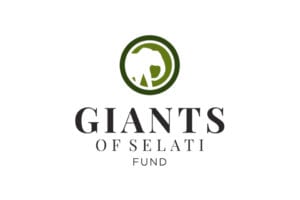 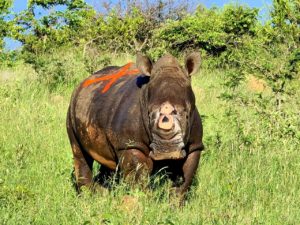 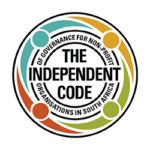